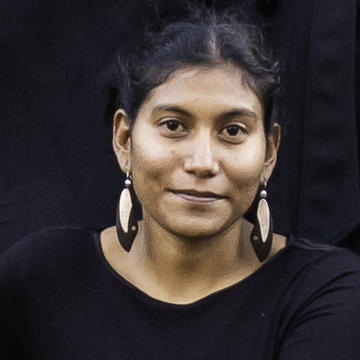 The problem: How to make donor-grantee relationships more equitable?

The solution: We don’t need to keep talking about it, we just need to do it

The “Fighting for fairness: investing in local solutions” panel is the most practical event I attended at the Skoll World Forum, and given who was in the room, it could very well be the most actionable. Nothing I heard was new, but how I heard it, and whom I heard it from was both humbling and hope-inducing.

The session was facilitated by Andy Bryant, Executive Director of the Segal Family Foundation, Atti Worku, founder and CEO of Seeds of Africa, and Solomon Benge King, Founder and CEO of Fundi Bots. They spoke very little, a few words to open and close, framing an hour long workshop to address the uncomfortable question of the relationship between donors and grantees, or ‘doers’ as they were referred to throughout the session.

The audience, a mixed bag of donors, doers and “others”, broke into small groups, utilizing this safe space to share their perspective on:

Post-its, flipcharts and designated group spokespeople made it all feel very actionable. A useful ruse to keep us from fading, post lunch on day 3 of the Forum.

Blurring the line between donor and doer

My group had two doers, five donors and three ‘others’ (yours truly included), but most interesting of all, many amongst us were mixed -persons who had long been doers and recently became donors, or straddled both identities in some way or another. Seeing that the line between doer and donor is, (and should be), blurred was one of the most important takeaways. Whilst acknowledging the asymmetrical nature of the donor-grantee relationship is necessary, this barrier could be diluted by changing how both sides communicate with, and posture vis-à-vis each other. Andy Bryant summed up the rationale quite simply: “it’s all about the math: how to reach more problem solvers, who can solve more problems, more effectively?”. Changing power dynamics then, is about shifting mindset; both for donors, who could do more to valorize the expertise that grantees bring, and for doers, who must themselves muster the courage to stand their ground and view themselves as experts.

The quest for ‘trust’ by way of flexible criteria and networks

Inevitably, ‘trust’ was cited frequently in a session like this one. Having worked in peacebuilding for the biggest part of my life, the ‘T’ word tends to give me chills, as I anticipate the empty rhetoric that can accompany such an emblematic, yet abstract concept. It was a pleasant surprise then, to come out of the session with a list of tangible ways in which trust could be fostered between donors and doers. Two simple yet powerful recommendations were for donors to create flexibility in their criteria for partner selection, and for stakeholders to find ways to share information. 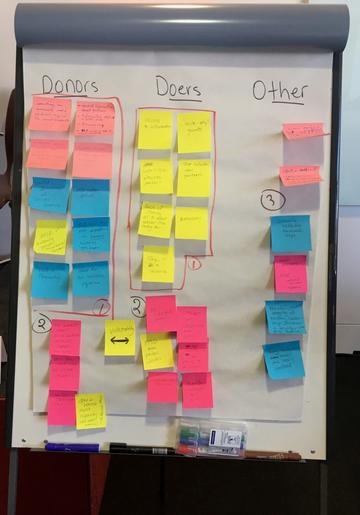 Recommendation 1: “Just fix your criteria, we actually have the power to do that!”.

Many of the doers in the room recounted situations in which they had become frustrated by the fact that potential donors would applaud their work but hold back on funding because the organization did not meet all the grant criteria, whether in terms of organizational structure or areas of intervention. Donors too, especially those from larger organizations, pointed to the rigidity of criteria or complexity of decision making processes as a key barrier to identifying new partners or more locally embedded partners. As a result, grants tend to get distributed to a band of “usual suspects” who often go on to act as gatekeepers to other organisations or entrepreneurs in their communities. A genuine commitment to local solutions requires some appetite for risk: gambling on unknowns and allowing some margin of initial failure.

Recommendation 2: Opt for a collaborative, rather than silos-inducing competitive organizational culture

Donors with positive experiences of local partnerships emphasized initial, and continued investments in learning about the context and most importantly of its actors. That process is often costly, and as contexts become more remote, the cost and unreliability of information tends to increase. Working through geography or sector specific networks of doers and donors provides a means of sharing information but also of creating rapport beyond the confines of the donor-grantee relationship. These networks also create opportunities for interactions which in turn cultivate the types of relationships needed to build trust.

These would have been good, but merely aspirational thoughts, had we been a group of students in a classroom, or even just a group of social entrepreneurs speaking amongst ourselves. But we were not. The people in the room were the ones with the decision-making power, and so, there is a great opportunity to enact the expert knowledge of our facilitator (and doer), Solomon King, who shared his life mantra to “talk little, and just move on to action.”

Anupah Makoond is pursuing an Msc. in Evidence Based Social Intervention and Policy Evaluation at the University of Oxford. She has spent the last five years supporting peacebuilding and humanitarian initiatives in East and West Africa, Central America and South East Asia.