On blackberries and change

On blackberries and change

Skoll Scholar, Sandra Fisher-Martins, poetically portrays her life in Oxford since arriving here with her husband and son 1-year ago to join the MBA programme at Oxford’s Saïd Business School.

If I followed the fence of the train station and turned left onto the Botley Road, I could walk to the Business School in less than 10 minutes. I rarely did. Almost every morning I took a right onto a dirt path overgrown with brambles and crossed a short bridge over a swampy ditch to walk along the 50-metre stretch of canal to the railroad underpass, brimming with urban wildlife.

In September there were still some blackberries on the tallest bushes and the odd fish in the water. In October the spiders were out. Come November, the riverside grasses had died, and the paths widened. December brought snow, silence, eerie light. In January and February robins, squirrels, and the occasional fox were still there, braving the cold. March gave us more snow and the first blooms. By April the iridescent bugs and the flowers were back. In mid-May, the river was blanketed with fluff from the poplar trees, and the pikes and roaches congregated in the shade of the train tracks. At the end of June, the brambles’ pale pink flowers crowned bright green berries, promising another Autumn feast.

I have never felt the passage of time more distinctly. As the seasons changed and the riverside path went from dusty to muddy, from frozen to flooded, I noticed and cherished the sunny spells as much as the drizzly days. 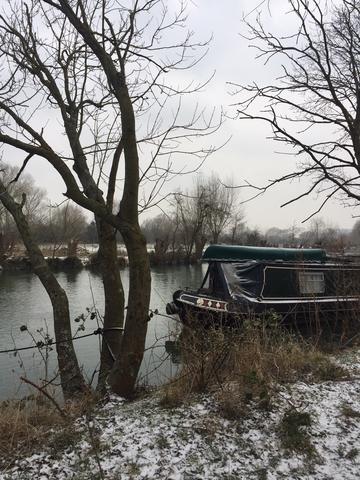 I came to Oxford looking for change, uncertain of the direction it ought to take or where it could lead. The encounters, experiences, conversations, and opportunities awarded by the MBA created the fertile conditions for it to occur. In fact, they made it unavoidable. It would be impossible to be in this environment, with these people, and not be permeable to ideas, ways of being, aspirations.

In Michaelmas, Herminia Ibarra’s lectures had me wondering whether the identity I had built over the years still suited my goals — and what could replace it. In Hillary, I could feel my priorities shifting and a pull towards areas that had never been on my radar, like innovative finance and climate change. At the beginning of Trinity, darkness threatened to take over. In Oxford we learn to take things apart and question them from all angles — a valid approach if applied in moderation; however, indiscriminate use can undermine the modicum of optimism necessary to keep ‘daring greatly’. By the end of the term, hope had been restored, as I started exploring a partnership that will take Claro’s mission global, as well as working with a colleague on an impact fund that picks companies based on their ESG performance.

I am grateful for the transformative opportunity to have spent this year at Oxford Saïd and to everyone who challenged and supported me — colleagues, lecturers, and particularly the Skoll community. Sustained by their thoughtfulness, I was able to engage with the ups and the downs, learning and changing every day. As I prepare to continue my journey, enriched with dozens of new friends and fired up by fresh, better questions, I hope that I will remember and cherish the sunny spells as much as the drizzly days.