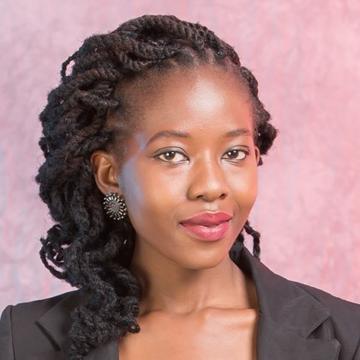 Each year the Skoll Centre invites a small number of Oxford students to the annual Skoll World Forum on Social Entrepreneurship. Each year they share their unique perspectives of the sessions and events that unfold during this magical time in Oxford. Our fellow, Grace Mzumara recounts the Skoll World Forum Debate where six panellists argued for and against the motion, “This house beleives that ‘Tech for Good’ is a false promise”.

How would you explain the world today, to the world that was, a hundred years ago? I imagine my wide-eyed self, sharing the marvels of modern day transportation and music from the little box in my hand that also, buzzes with ‘likes’ from humans I don’t know.

Well, in the chambers of the nearly 200 year old Oxford Union debating society, hosting the 2nd debate of the 16th annual Skoll World Forum on Social Entrepreneurship, the conversation is easy to picture. On the other hand, what would the world a hundred years from now, make of the world we are creating? With technology at the core of how we industrialise, will we have delivered on the promise of ‘good’? 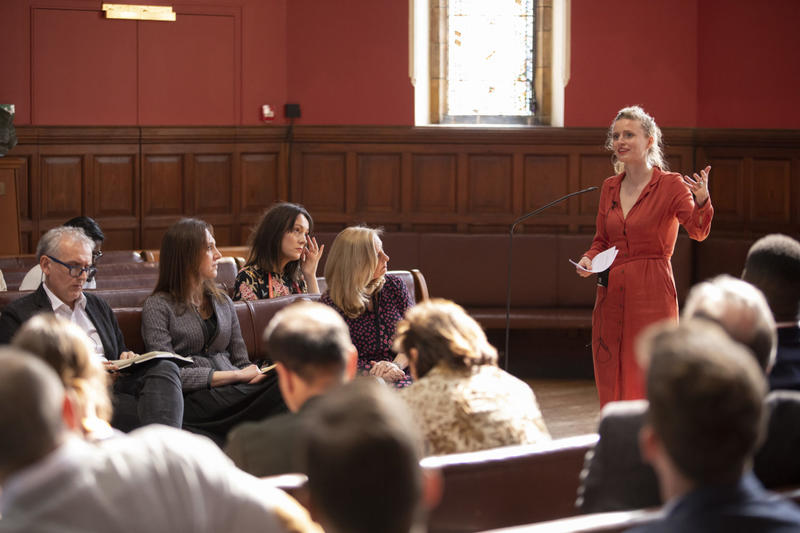 While acknowledging that technology is here to stay, and shape the world we know, the proposition built their case around the powers that drive it, and the inequalities it creates or sustains. Tanya O’Carroll, co-founder of Amnesty International’s global technology and human rights programme, opened with her confession of a ‘failed’ mobile application. She made her case on the public trust that technology has taken away. With examples of private companies like Amazon and Facebook, compromising our information and privacy, Tanya described how little is done to protect people from the powers that exploit the industry.

Additionally, the second proposition speaker, Dr Mariarosaria Taddeo from the Oxford Internet Institute, made her case on the unintended consequences of technology. She described the malleable nature of technology, to be used for bad even when intended for good. She adapted a Winston Churchill quote to mean that ‘we build technology, and technology builds us’. Dr Taddeos’ analysis showed that the promise of good depends on the ability of the society to provide it. She warned against wishfully thinking that technology generates a good in isolation of its drivers.

Tom Adams, the co-founder of 60 Decibels led an equally compelling case for the opposition. He argued that the loss and benefit scale of technology favours the benefit, even more so, for marginalised populations. He called for leveraging the ability and responsibility of societies to transform technology to become a tool for public trust. Toms analysis looked at transforming capitalism with impact investing and social accounting to meet public needs. 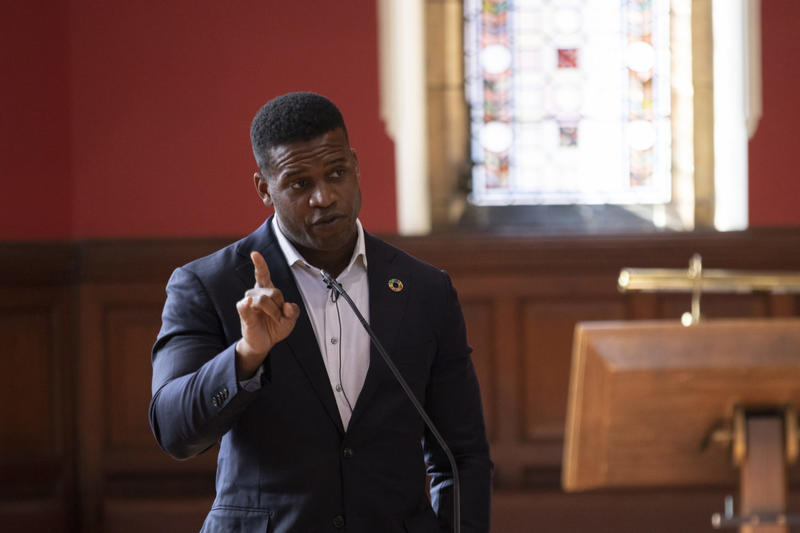 Chi Nnadi of Sela Technologies speaking for the opposition

Public needs being met in all parts of the world, by facilitating communications across socially or economically divided groups was the central argument for the second opposition speaker, Chi Nnadi, founder and CEO of Sela Technologies. He shared the story of how a WhatsApp group and mobile phone pictures were central to managing oil pollution in the Niger delta. Chi argues that technology has harnessed the power of information and communication to re-organise ourselves. This reflects our evolution as a society and our ability to make technology evolve for us as well.

In Oxford fashion, the first four debates were followed by six audience speeches for and against the motion, in what is called the ‘floor debate’. The audience was clearly invested in the motion, with propositions tackling issues from romanticizing technology in thinking apps can solve everything, to discussing the inequality of money as a need for and driver of technology. The opposing participants fought back. They argued that technology has become an extension of ourselves and advocated for social ethics to curb what ‘bad’ technology. 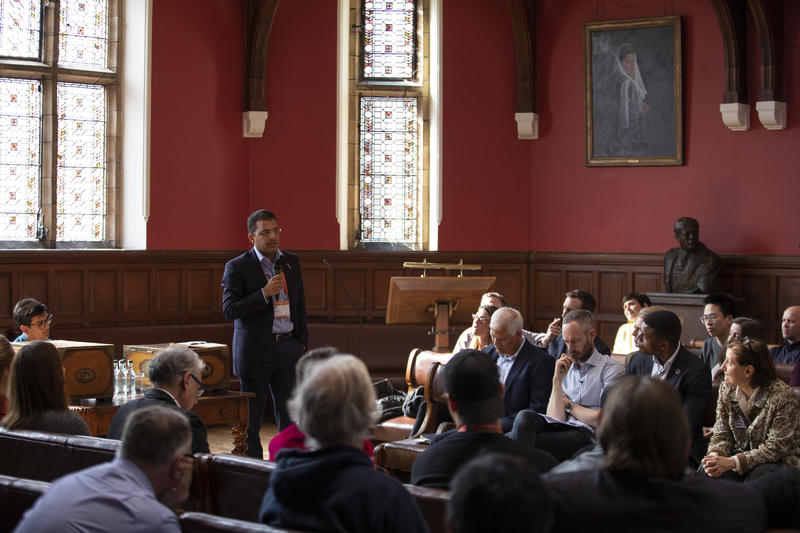 Oxford alumnus, Tarun Varma of Lego Foundation, was one of the speakers from the floor.

With two speeches remaining to the vote, the closing speakers were set to draw the split audience, each to their side. Closing Proposition speaker, Sean Hinton from Open Society Foundations, focused on the increasing inequalities caused by technologies. He argues against the technology utopia saying, ‘our belief in the promise of technology, can undermine our strife to understand societal concerns’. Sean concluded with a powerful argument, stating that the economic arc of technology disproportionally excludes the poor and the old, and that these were the central failures, on the promise of good. 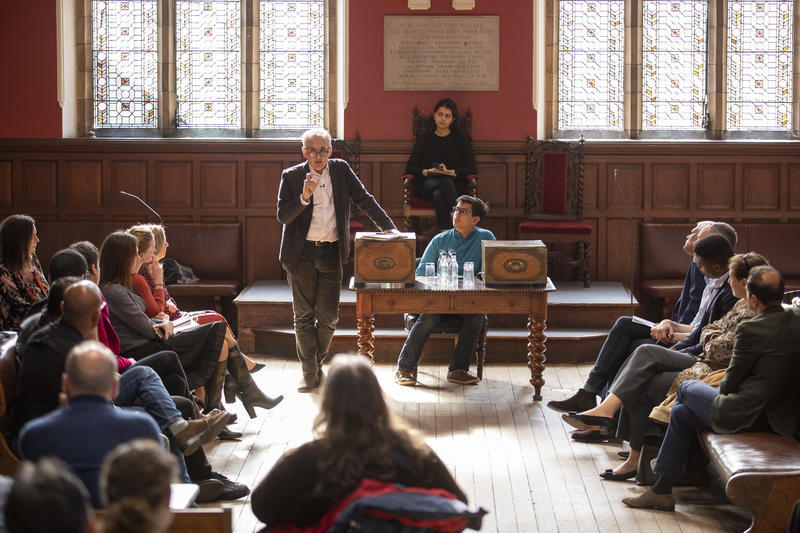 Sean Hinton of Open Society Foundations closed the argument for the proposition side.

I couldn’t imagine a better rebuttal from the propositions points than when Shashi Buluswar, CEO of the Institute for Transformative Technologies, took the stage with a seed, a vaccine vial, a DNA reader, and well, a ‘pretend’ bag of mosquitoes. He showed how each one of these objects represented a promise of good, that was kept. From sustainable agricultural technologies, vaccines saving millions of lives, to technologies combating drug resistance by accurately detecting bacteria. Shashi Buluswar made an unexpected speech, using existing technologies for good, as evidence of the good in upcoming technologies. 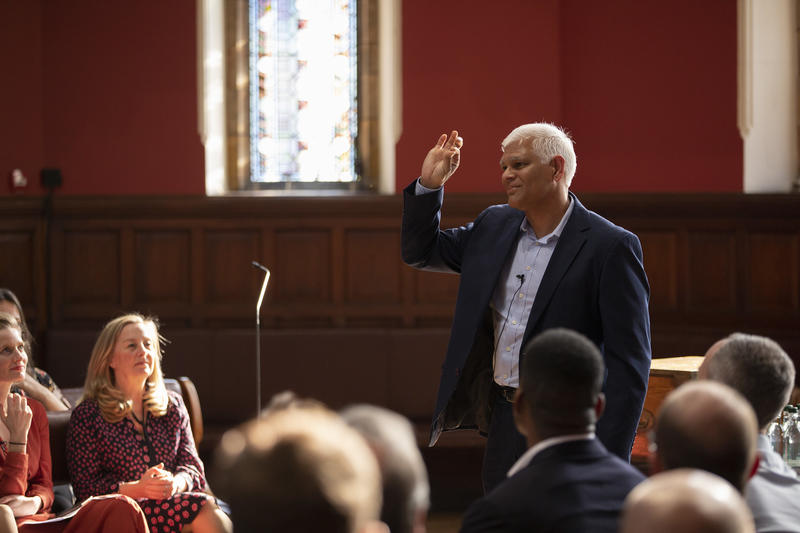 Shashi Buluswar of the Institute for Transformative Technologies gave a powerful closing argument for the opposition.

With such a compelling presentation, it is perhaps no surprise that the opposition, the ‘noes’ had the day for the 2019 Skoll World Forum Debate. It displays the understanding that technology is central to how we operate in the world today, and the hope we have, in generating public good in these operations. This year, all Skoll Awardees are technology-based, with one even solving problems created by technology. It shows our willingness to participate in this form of industrialisation, and our eagerness to harness our intrinsic power, to fight for the good in our era of development. I believe that this good will span centuries of generations to come.

Grace Mzumara is a Malawian medical doctor reading International Health and Tropical Medicine at the University of Oxford as a Weidenfeld and Hoffmann Scholar.